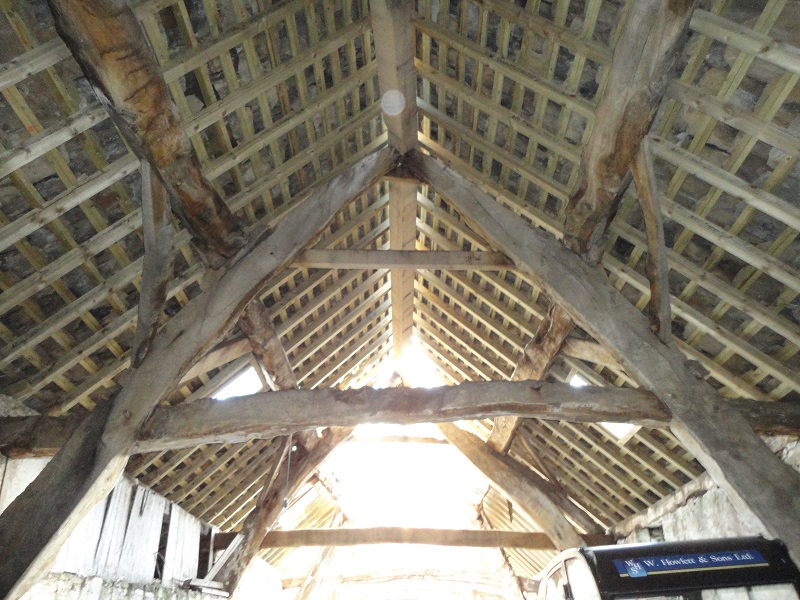 Renewal of roof coverings and structural repairs to a 7 bay 7 oak cruck medieval frame barn; overall budget £150K including fees and VAT. 1. Asbestos testing and removal-Construction (Design and Management) Health and Safety Regulations 2007. A planning co-ordinator will be required to be employed if the construction period is anticipated to be more than 30 working days or 500 an days. 2. Protected species survey; require-scoping before end of April-flight survey from May/June onwards 3. Structural engineer’s check is required of north-west gable end arrangement which includes a mild steel truss installed during a previous round of structural stonework repairs directly funded by English Heritage. The end oak cruck remains exposed to the elements and is load bearing but in relatively poor condition. 4. Oak frame timber repairs are complex-wind brace, ridge and wall plate replacements.One or two overlapping splice joints to purlins and ridge beams will require strengthening. 5. It is thought that the barn would have been original thatched and date to the 15th/16th centuries; with timberboards placed between the cruck end foundation padstones. Which are still clearly visible at around 750 mm high. The stone ‘curtain walls most likely introduced in in the 18th and 19th centurys. It would appear that the south west long wall is older than that on the north east. The section of wall in between the lean to addition and the long barn may be older perhaps dating to the 17th century. The stone remains structurally stable in good condition. The north east long elevation has been repointed. The south west has open joints. 6. The barn is presently roofed with corrugated sheeting on a softwood grid of joists and purlins. This is now in poor condition. This replaced stone slates a few of these remain stacked on the north east side of the barn. These were stripped and mainly destroyed by Trevor Martins father. The roof is quite steeply pitch-once stone slates start to slip there is normally a rapid and dangerous deterioration. Removing them would also have been extremely difficult without scaffold due to their weight. Hence they were thrown to the ground, smashed and dumped in a pit. 7. There are local contractors who only work with stone slate roofs who have Anthony Short and Partners LLP 34 Church Street Ashbourne Derbyshire DE6 1AE a large number of stone slates that could be made available. Following submission of fee offer a recommended appointment was confirmed to Trevor Martin by Natural England. See letter dated 25th January 2013. All works to be completed and invoiced as soon after the 1st April 2013. Tim Allen of English Heritage East Midlands Region to be consulted. Following on from a telephone conversation with Tim Allen we agreed that his maininterest is an options appraisal for the roof covering. This would be including within Management Plan.It is likely that planning and listed building consent will be required by the LPA.