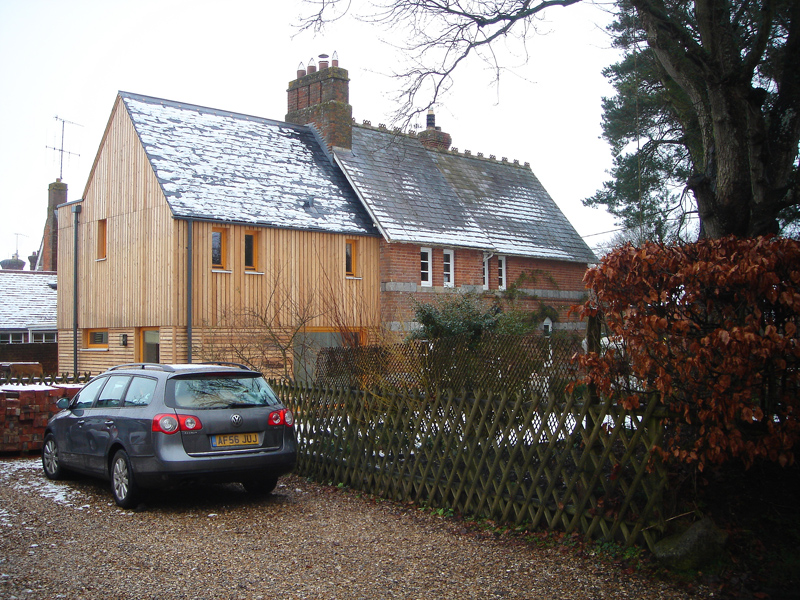 New Build, Within a Conservation Area

The project is an extension to a Victorian School House, now privately owned and occupied as a family home. The new extension replaces an earlier, 1970’s single storey lean-to extension. The existing house lacked the space to allow it to function effectively as a modern family house. The house is located in the centre of a small, picturesque Wiltshire village and is attached to the local primary school. The school and schoolmaster’s house were built together in the 1870’s and make a strong contribution to the character of the village, which has a designated conservation area at its core. The clients, were clear from the outset that they wanted to add an extension in a contemporary style and that it should be made of wood. They were involved in the design from the outset and the project was the product of a strong design collaboration between architect and client. Despite favourable early pre-application advice from the local planners, and much support from the local community, the conservation officer had difficulties in accepting the contemporary design, despite consent being granted previously for a larger, traditional extension. After a prolonged period of negotiation an acceptable solution was finally found by reducing the overall length of the extension and changing the roof finish from zinc sheet to Welsh slate to match the existing. The innovative building superstructure was manufactured by a specialist joinery company in Slovenia to Milton Architects’ drawings and shipped to Wiltshire as a pre-fabricated kit. Wall, floor and roof panels were completely assembled off-site, including internal linings, insulation, external cladding, glazed windows, doors and electrical conduits for services. The demolition, foundations and ground slab were prepared by a local contractor and a Slovenian erection team completed the on-site assembly in just four days. Remaining fit-out and external works were completed by local tradesmen under the direction of the client. The superstructure consists of load bearing, insulated timber-frame wall panels with Fermacell dry-lining to the interior and a ventilated Larch rainscreen cladding to the exterior. The intermediate floor was constructed from prefabricated timber-frame cassettes, as was the roof, where thermal insulation was pre-installed at the factory. The new extension achieves the following U-values; walls: 0.25 W/m2K; roof: 0.20 W/m2K; ground floor: 0.19 W/m2K; doors and windows: 1.4 W/m2K. Dimensional co-ordination between the existing Victorian masonry building, the new, in-situ cast concrete foundations and the all-timber extension was particularly critical given the pre-fabricated construction method for the superstructure. The finished result was executed with millimeter precision.