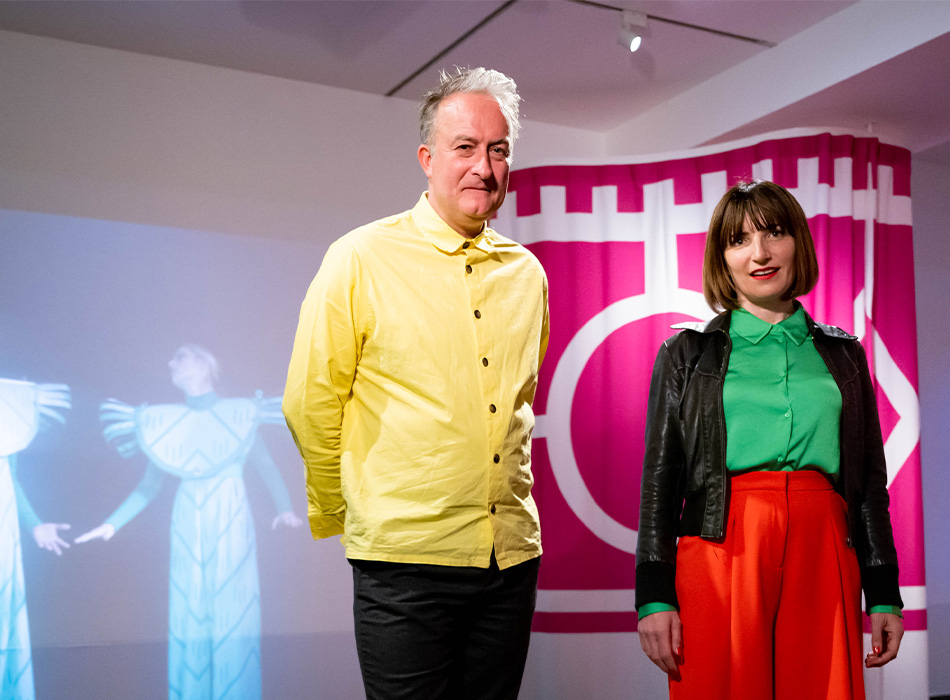 Hear from architect Charles Holland and visual artist Di Mainstone, as they offer an exclusive opportunity to go behind the scenes of the latest exhibition at RIBA, Radical Rooms: Power of the plan. Learn how architecture, visual art, and performance art have been used to present the exhibition’s narrative, as well as how the exhibition was designed, developed, and produced, in this unique, one-off event.

Holland and Mainstone will be joined by the curator of the exhibition, Margaret Cubbage.

After the presentations, there will be the opportunity for audience members to ask questions directly to our speakers.

Di Mainstone is a multi-disciplinary artist. Fascinated with the human form, she creates body-centric devices ranging from wearable musical instruments to interactive public realm sculptures and large-scale audio-visual installations. Working with cross-sector collaborators, Di explores how digital technologies and physical materials can inspire us to move expressively and connect with our environment through a multi-sensory lens. Di's most acclaimed works are the Human Harp, a digital musical device that transformed Brooklyn Bridge into a giant harp, and an audio-visual environment called Soundpit which was a sellout success at Southbank Centre. Di is also a multi-award-winning filmmaker. She writes and directs films that feature her inventions, sculptures, and costumes and focus on issues such as climate justice, re-wilding, and forgotten women’s histories. Di's climate inspired art film Time Bascule, commissioned by London’s Tower Bridge, has won multiple international awards. Her films have been funded by the City of London Corporation, WITCiH, ACE, British Council, BFI. Di's work has been exhibited and performed at Southbank Centre, Tower Bridge, Roundhouse, National Portrait Gallery, Swedish National Touring Theatre, Barbican, The Sage, V&A, and more.

Charles Holland Architects (CHA) is an international architecture and design studio. The studio’s work is multi-disciplinary in scope and includes buildings, exhibitions, public art, and urban design as well as teaching and research. Before forming CHA, Charles was a founding director of Ordinary Architecture and a director of FAT. Whilst at FAT he was the director in charge of a number of key projects including A House For Essex, the practice’s collaboration with Grayson Perry.

Alongside his practice activities, Charles is involved in teaching, writing, and research. He is a Professor of Architecture at the University of Brighton and a Visiting Professor at the ABK in Stuttgart.