Set in a lush landscape across the street from the Singapore Botanic Gardens, Cluny Park Residence comprises 52 units positioned over four storeys. The condominium takes full advantage of its location by the new UNESCO World Heritage site, with every unit sporting a large balcony bordered by angled fins that provide shade and divide neighbouring units, whilst framing views towards the garden. The units’ full-height glazing dissolves the barrier between indoor and outdoor space, visually extending the interiors. Ground-floor apartments feature private patios and pools that are protected from the street and the adjacent lots by a layer of perimeter planting. The top two floors house duplex units, allowing for generous double-height living spaces and higher ceilings on the fourth storey. Public facilities – which include a pool, Jacuzzi, barbecue pit, and a gym – are situated on the roof level with unhindered 360-degree vistas accessible to all residents.

Shaped by apartheid-era planning, informal settlements in South Africa can create poverty traps that threaten social mobility. Responding to this challenge, the project combines modular two-story building prototypes and inclusive spatial planning with integrated livelihood programs including micro-financing, renewable energy, water management, and skills training. The strategy reduces the current footprint and transforms recovered land is redesigned for a safer urban environment, installing basic services for landscaping and urban water management, and additional sales and rental stock for cross-financing possibilities. The housing units are based on a core and shell principle within a row house configuration. The project utilises innovative design and computational tools to offer planners and the community a powerful interface to synthesise factors such as affordability, individual unit size and development with minimum displacement.

On the basis of market analysis, five different themes were defined for this residential scheme: living with a view, courtyard living, living with trees, patio living and balcony living. Each zone is assigned specific rules reflecting the theme, creating a dialogue between the building and its surroundings. The result is a new form of high-rise apartment building that resists any clear typological classification. The tower block is formed on a polygonal footprint with a floor area that expands as it rises vertically. The different uses of the encircling balcony slabs are developed into an architectural leitmotif. The resulting marginal contour can be read as a re-drawing of the topography of the mountains. Planting is harmonized with the orientation of the building, stacking urban living space upwards and incorporating private gardens.

A verdant tower in the heart of Singapore’s dense Tanjong Pagar District, the Oasia Hotel Downtown is a prototype of land use intensification for the urban tropics. Unlike the glassy, sleek and sealed skyscrapers that evolved out of the temperate west, this tropical “living tower” incorporates plants into its red permeable aluminium façade. The building gives greenery back to the city through its sky gardens, sky terraces and vertical green screens. The green spaces create a biophilic environment that visually and psychologically engages the office tenants, hotel guests, staff and even the inhabitants of the surrounding blocks. In response to the brief for distinct offices, hotel and club rooms, WOHA created a series of different strata, each with their own sky garden.

After the Ludian earthquake in August 2014, most of the local rammed-earth buildings in Guangming Village were destroyed. Villagers chose to build brick–concrete houses during the reconstruction period, but the price of building materials rapidly increased and became unaffordable for most local villagers. In response, traditional rammed earth technology was improved with a “high science and low technology” strategy, which focused on seismic capacity and cost efficiency. The first prototype house was built for a single mother with two children, and designed based on the layout of her old house. The components of the wall are well adjusted using clay, sand, and grass. The result of a shaking-table test corroborates that the seismic performance can meet the local codes. Further anti-seismic building systems and prototypes have since been developed to achieve a substantially high building quality. This scientific and systematic reconstruction strategy will provide guidance for national reconstruction policies and rammed earth building standards in the future.

Bairro Padre Cruz is a large social housing neighbourhood in the north fringes of Lisbon, originally built by Lisbon Municipality in the 1960s to accommodate council employees and their families. This project is part of a wider regeneration programme for the entire neighbourhood that consists of replacing the original single storey housing in advanced state of decay.

The project brief was for 20 homes ranging from one to four bedroom units with individually allocated allotments. The proposal consists of a series of two, three and four storey volumes, placed perpendicularly to the lower street, and consequently aligning with the geometry of the more recent housing development to the west of the site. The volumetric fragmentation generates an array of small scale urban plazas at both lower (street) and upper level (pedestrian path) that will accommodate the allotments and access to all units, promoting sustainable urban living whilst enabling social engagement among the residents. These external spaces function as a threshold that mediates between the urban scale of the city and the domestic scale of the residences. Each unit has its own front door from these small urban spaces.

An urban stair through the centre of the plot connects the street at lower level with a pedestrian path at upper level. This path evokes the stairs of Lisbon historic centre, where the experience of the urban space is largely characterized by the dramatic topography of the city. 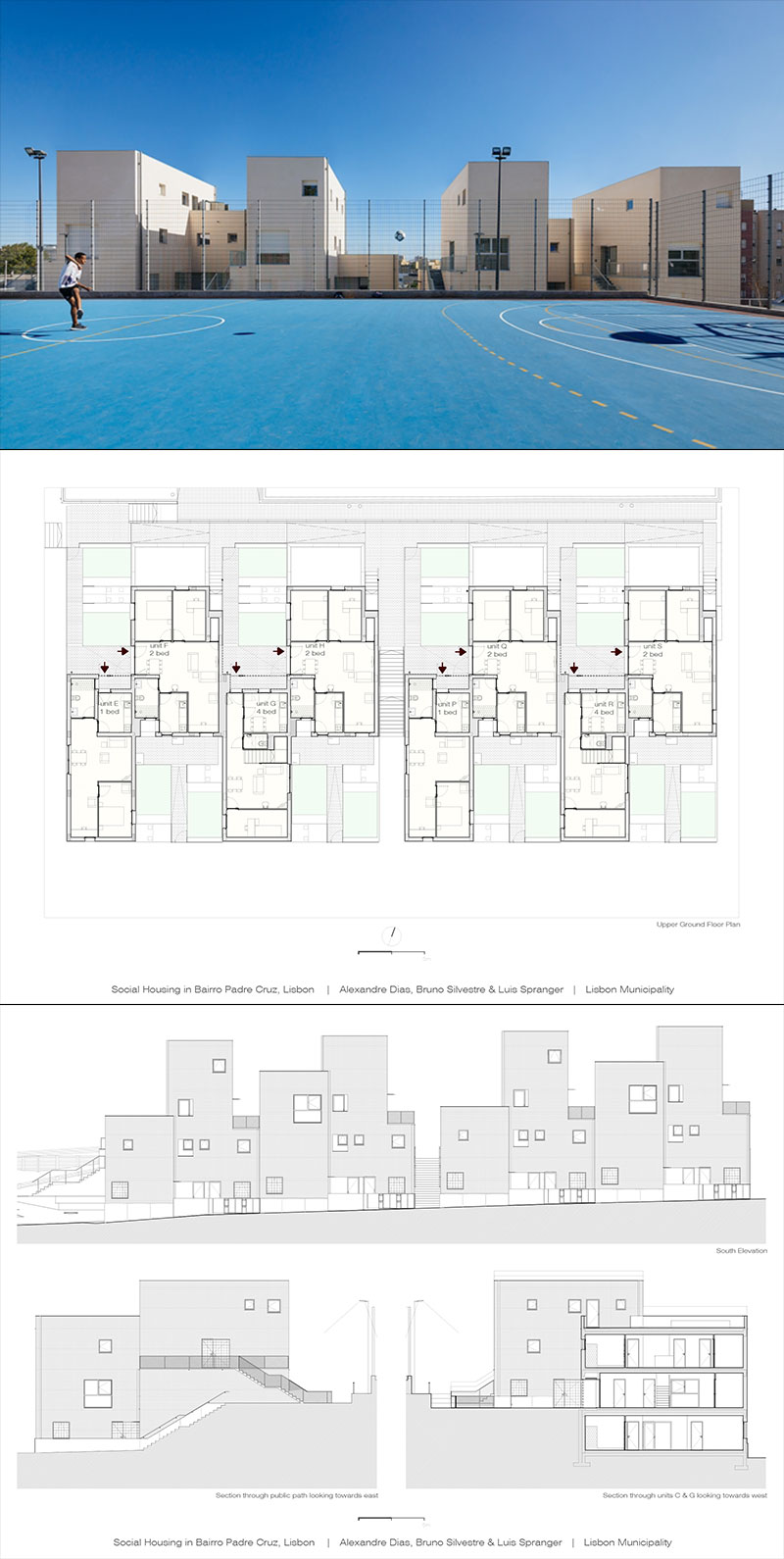 Tatsumi Apartment House is a residential project located in eastern Tokyo. The neighbourhood features congested streets and a density of public transport stations, and the client’s intention was to create a landmark building for the district. Tatsumi Apartment reaches 10 floors in height on a rather modest plot area of 48 square meters. To protect against earthquakes on the sandy soil of Tokyo Bay, a series of nine concrete piles of 30 meters were dug below ground to secure the foundation, which was then anchored with steel cables that run to 50 meters below the sidewalk. The design takes advantage of the building's composition, creating comfortable human-size niches in between the massive vertical and horizontal structural members.

Tolsa 61 is a reinterpretation of Mexican social housing, located in the “Ciudadela” neighborhood in the southwest corner of the historic center of Mexico City. The neighborhood maintains much of its traditional architecture from the 18th and early 19th century. The design takes advantage of this context to link the living spaces with their immediate surroundings through controlled openings “excavated” in the building's mass. These terraces are the intermediate elements that relate the interior and exterior while offering private scenery that is built into the facade of each units. Designed for low-income families, the block contains 25 one and two bedroom apartments ranging between 45 and 60 square meters, each with a parking lot. The material concept for the interiors combines the simplicity of contemporary design with the details of Mexican architecture; a hybrid where modern sensibility is mixed with local materials.

The Vertical Forest is a model of sustainable residential building, a project for metropolitan reforestation that contributes to the regeneration of the environment and urban biodiversity without expanding the city upon its territory. It is composed of two residential towers of 116 and 85 meters in the centre of Milan, on the edge of the Isola neighbourhood, and hosts 700 trees and over 20,000 plants distributed across its facade. The towers contribute a number of trees equivalent an area of 20,000 square meters of forest. The facade guarantees the highest environmental performance by creating a controlled micro-climate system. Different plants help improve air quality, absorb carbon dioxide, fix fine dust, produce oxygen, protect against direct irradiation and mitigate acoustic pollution. Adopted on a greater scale, Vertical Forests in cities could set up a network of environmental corridors.

Getting the content right for your website should be a priority for the new year. Find out from a web expert how you can make quick, easy changes to your practice website to attract better clients this year and improve your overall brand.

Every month, RIBA London showcases a London practice. For January 2023, we spoke to Freehaus. Led by practice directors Tom Bell and Jonathan Hagos, Freehaus is a diverse yet like-minded studio of architects and designers, working to make accessible, honest, and representative buildings that shape the lives of those who use them.

Nell Brown, RIBA Senior Policy Advisor, reflects on the findings of Mission Zero: Independent Review of Net Zero and what it says about the built environment.
keyboard_arrow_up To top